So Much to Say

It's Valentine’s Day, and I should be out having a romantic dinner with my wife. Unfortunately, we are quarantined at home on Sundays and I'm suffering some ill effects from something I ate yesterday. So, as I was sitting here on the couch, I realized I hadn’t written a blog post for a while. And wow!, it has been a while. There is so much to report that it would be impossible to catch up on everything in one post. Let’s start with an update on the last one.

After what seems like an eternity, I finally have my license to fly in Bolivia! It required a written test, a flight test, handing over a bunch of cash, and then waiting for several weeks—but I finally have a piece of plastic that authorizes me to fly in this country! I've been able to make several ministry flights, mostly to Oromomo and San Lorenzo, where several of our missionaries work. But I also made one flight to a town called Baures to help deliver some medical supplies and biosecurity supplies to the medical workers there. It has been great to feel like I am actually making a contribution to the mission as a pilot, rather than just being extra weight in the airplane! 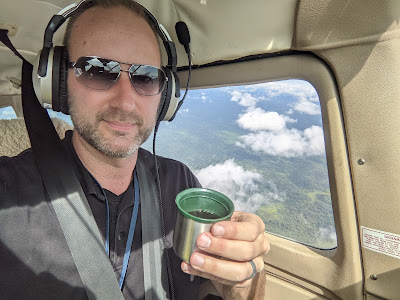 Happy to be cruising over the Beni with a good cup of coffee,
transporting building supplies for the Bible school in San Lorenzo.

Of course I had been doing other valuable things: studying Spanish, doing aircraft maintenance, and helping with administrative tasks that are a necessary part of operating the ministry here in Bolivia. If I never would have been able to fly, there would still be ways I could support the ministry, but I am grateful that I am finally flying on the field—something that I have been looking forward to for many years! 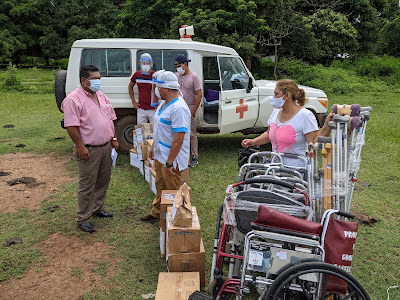 Delivering medical supplies to Baures with Pastor Elias.
Now, the bad news. Saying that I have my license to fly in Bolivia in a bit of an oversimplification. What I have is a convalidation of my FAA pilot certificate, which will be valid for up to one year. That means I still need to get a permanent Bolivian pilot certificate, which will take more time and money. Please pray for us as we figure out the best (and most cost-effective) way to do that.

There’s more to share, some of which we talked about in our January newsletter. Please check it out if you haven’t had a chance to do so. That’s all for now!