After several years of working toward the goal, I came to Bolivia in 2019 with my commercial pilot certificate, instrument rating, and airframe and power plant mechanic certificates. The unfortunate part is that none of these are recognized in Bolivia. So I've spent the better part of a year learning Spanish and flying with other pilots who can legally act as "pilot in command" in the right seat while I fly in the left seat. 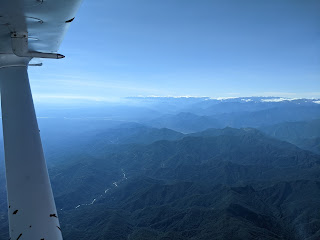 A view from the left seat of the Cessna 206.

This week I took the first of many tests that will be required for me to serve as a pilot-mechanic in Bolivia. I successfully passed the theory test (in Spanish—an extra challenge) for the convalidation of my pilot certificate! Convalidation is not a word we really use in English, but it means that Bolivia will recognize my pilot certificate from the United States. But there's a catch. We had hoped that the convalidation would be for at least two years, and praying that by some miracle I might even get a permanent Bolivian license. But as of now, the law states that the convalidation will be for six months, with the possibility of a single six-month renewal. This news was a big disappointment. So what does that mean for me?

I have already begun the convalidation process, and after that I'll have one year to get a Bolivian pilot certificate before the convalidation expires. That means I get to start over as a private pilot student, and eventually I will go from being recognized as a commercial/instrument pilot to being recognized as a private pilot only in Bolivia (my FAA certificates will still be valid in the States). Of course, it will be much easier this time around, since I still have all the knowledge and skills that I've developed over the past several years. But I still need a piece of paper (or plastic) that says I can legally fly in Bolivia. That piece of paper will require 40 hours of flying, more tests, and several thousand dollars.

Please pray with us as we continue to work through this. I still have two flight tests ahead of me in order to get the convalidation, and then we need to start thinking through options for flight schools. Of course, it would be great if by some miracle I could get my FAA licenses permanently converted, but unless we get Bolivian citizenship this does not appear to be a possibility. It is possible to get Bolivian citizenship while retaining our U.S. citizenship, but that requires being in Bolivia continuously for three years.

So we're not exactly sure how things will proceed, but thanks for praying with us and following along with us on this journey! Your support and encouragement means a lot!