As I mentioned in the last post, we had the privilege of participating in Calvary Church's missions summit last week. Four couples were invited to the missions summit. Two of them were veterans of overseas missions work, and two of them (including us) are still preparing to go. It was humbling to stand next to these veterans, who have many years of experience under their belts. But we were also very encouraged by them, and by the staff and members of Calvary Church.

Also invited to the missions summit was Jeff Hartensveld, Director of Mobilization for AGWM. Jeff spent more than 20 years as a church planter in Indonesia before coming back to the States to serve in his current role. He gave a very encouraging message in Sunday morning's services, and we had the opportunity to interact with him throughout the week. During one of these interactions, we discovered an interesting connection with MMS Aviation. As I told Jeff about my plans to serve in missionary aviation, he told me how valuable the airplane was in Indonesia, particularly after the tsunami in 2004. In his words, "I was platinum on MAF [Mission Aviation Fellowship]". As it turns out, the airplane that I helped to rebuild and send to Suriname (see page 2 of MMS's latest newsletter) was one of the airplanes that Jeff utilized after the 2004 tsunami! It was exciting for me to meet someone who had been a passenger on the very airplane I worked on, and the type of airplane I will be flying in a few years. This was also a validation of the importance of missionary aviation in advancing world missions, especially to those who have never heard of missionary aviation.

There are many things I could say as I reflect on the week, but I'll just pick a few:


Bridging denominational borders
I grew up in the Assemblies of God church (at Calvary, in fact), and that's where I first gained a heart for world missions. However, Tara and I have attended churches of various denominations as we moved from place to place, and MMS Aviation has no denominational affiliation. While Christian denominations still have their place, it is encouraging to see different churches and organizations working together for the common goal of making Christ known to every nation. We were the only non-A/G missionaries at the missions summit, yet we were embraced by everyone we met.

It's okay to dream big
If you know my story, you may recall that my desire was to begin training as a missionary pilot right after high school. That didn't happen, and instead I ended up going to college at my last-choice school while living at home (mainly to avoid going into debt). As it turned out, I had a great experience there, and met my wife at Toledo. Nevertheless, I still had to deal with the pain of giving up my dream of taking the Gospel to remote frontiers through aviation. Since then, it's been difficult for me to "dream big", for fear that I will have to go through the same disappointment all over again. But as Tara and I reflected on our week, we started dreaming about ways that God could bring together our passions and gifts (along with some others in the Church) in a unique and exciting way. I can't elaborate here, but you can be praying that God would pave a way into a place that currently seems impenetrable—one that we would love to invest our lives in.

Well, I planned on writing more, but it's time for some breakfast. Maybe I will pick this up in a later post. Thanks for taking the time to stay updated, and for your support of our work with MMS Aviation!
Posted by Aaron at 7:32 AM No comments:

This week we have the privilege of participating in the annual Missions Summit at Calvary Church in Maumee, Ohio. We, along with four other guests, were invited to spend several days with the people of Calvary, sharing our ministry and our passion for reaching the world with the hope of the Gospel and the love of Christ. 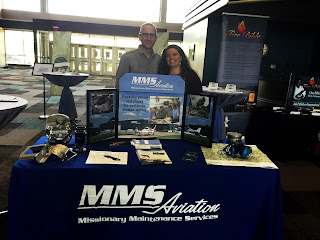 Yesterday was a busy day, sharing briefly in three morning services, talking in children's church (twice), and speaking with four groups of youth in the afternoon. In the evening we came back to share a meal with about 20 people from Calvary, and to talk more about our work with MMS Aviation and our heart for the world. Although it was a lot to pack into one day, we really enjoyed seeing old friends and making new connections with the other guests and the people of Calvary. It's exciting to see what God is doing around the world, and to see how our little mission fits into the larger work of building the Kingdom of God.

Throughout this week, we will have several more opportunities to interact with the people of Calvary Church, giving them a glimpse of our work with MMS, and encouraging them to live their lives for the glory of God. We appreciate your prayers over the next few days as we continue to participate in the Missions Summit, and look forward to sharing more with you later this week!
Posted by Aaron at 4:45 PM No comments:

Thanks for visiting our blog! If this is your first visit, please take visit our main web site at planeswithpurpose.com!