It was 4:00 am and we began dragging ourselves out of bed to get an early start on the day. I felt as if I hadn’t slept at all. Every time I closed my eyes during the night, I felt as if I was still bouncing down a dirt road, and in my mind’s eye I continued to watch endless miles of winding dirt roads pass me by. Whether I actually slept, I don’t really know, but it was most certainly not a restful night. 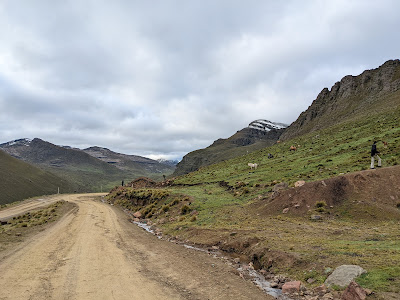 Despite being exhausted, this is all I could see in my mind when I closed my eyes and tried to sleep!

We grabbed a cup of coffee, then loaded up the two vehicles that we would take to the top of the hill to get us closer to the site where the airplane was located. In a cloud of grogginess and darkness, I placed my backpack into the back of my vehicle. I watched the door swing shut just as I realized that my keys were inside. I had a moment of panic, knowing that for some unknown reason our car (with its aftermarket alarm system) sometimes locks itself. I quick pull on the handle confirmed my fears: the doors were closed and locked with both sets of keys inside!

So here we were, hours from nowhere, with a bunch of our supplies locked in my car, along with my keys. No locksmith would be on call in this remote place. The only options were to somehow unlock the car from the outside or break a window to get in—not something I was excited to do since rain was virtually guaranteed. Thankfully, the rear passenger doors had only closed halfway, and after about 30 minutes we were able to reach in with a wire and unlock one of them. Thank you, Jesus!

We soon started driving up the hill, and I was quickly praising the Lord that I had locked my keys in the car. This road was the worst yet, and that delay had set us back just enough that we had a bit of daylight to illuminate the road ahead. I really think that little incident was a blessing in disguise! 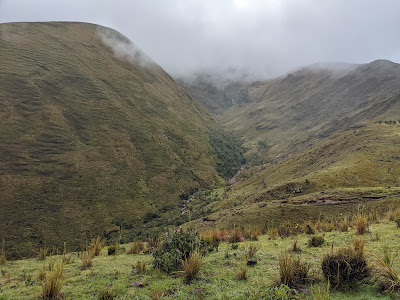 The terrain we would cross in order to reach the airplane.

We eventually made it to the top and gathered up the tools and personal items we would need to disassemble the airplane, and to be warm and dry for the night we would spend with a local family. A light rain was falling as we began our hike, so we put on our rain gear before setting out. The hike began around 13,000 above sea level, and we immediately started on a long downhill stretch. I couldn’t help thinking, “We are going to have to hike back UP tomorrow!” 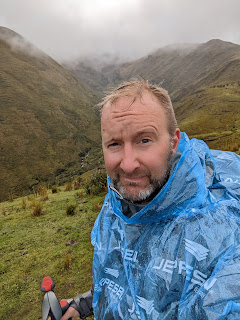 A horrible photo of me, but an accurate portrayal of my feelings at the moment! 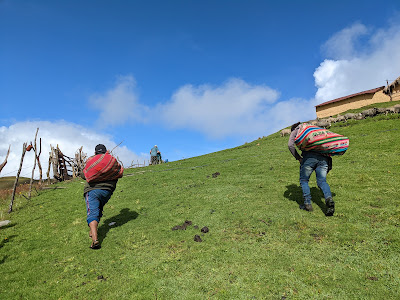 The locals seemed to tackle the steep terrain with ease. 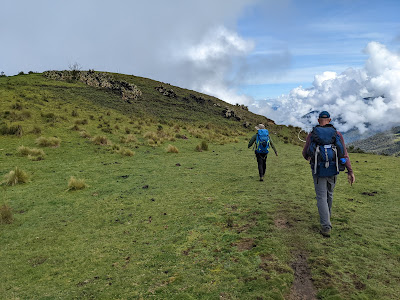 One of the easier sections, approaching the airplane site.

Down, up, down, up… The locals made it look easy, but I was struggling. Even though I live at 8,400 feet elevation and frequently walk stairs and hills, the weight of my backpack and the extra 4,000 feet of altitude made a big difference! We were challenged by rain, steep hills, and off-camber trails, but after more than three hours we finally arrived! 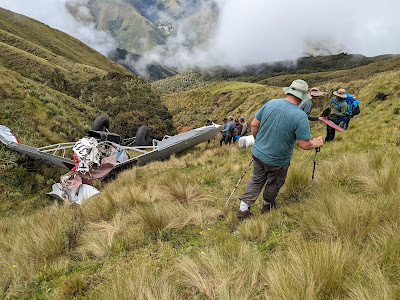 The last few hundred feet down to the airplane were quite steep, but fortunately there were some level areas to set up our tools. 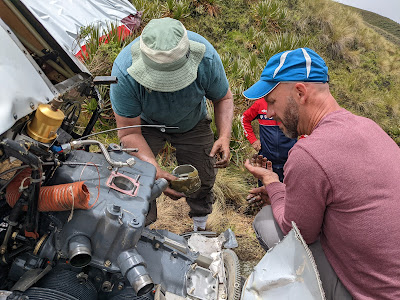 Rick and Tony working on the engine.

We descended the steep hill where DJ’s airplane had tumbled to its resting place and assessed the situation. I would work inside, removing instruments and radios. Tony and Rick would start on removing and disassembling the engine, which would be too heavy to carry out with the cylinders, pistons, and accessories still attached. DJ and Ryan would cut off the wings and tail, and salvage the structural pieces that could be reused. Josué was in charge of securely packing all if the pieces to be transported. 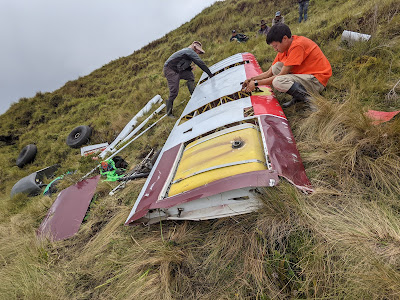 Salvaging pieces of the wing that would be saved.

As we worked, a steadily growing crowd of locals formed on the hillside. We had prayed for help, and God provided. While the work of disassembly was done by those of us who knew how to take things apart without inducing further damage, there is no way we could have gotten all the pieces out on our own. As we made progress taking things apart, the local men began to carry pieces out: in buckets, on their backs, and on mules. It was both impressive and humbling to watch these men haul heavy airplane parts over challenging terrain, as I struggled just to make it with just my backpack. 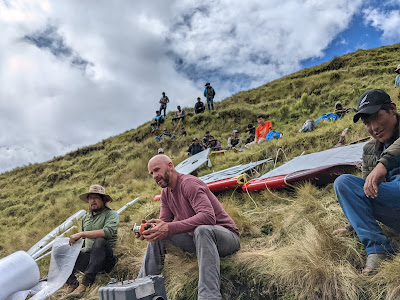 Locals gathering up on the hillside to watch and help. 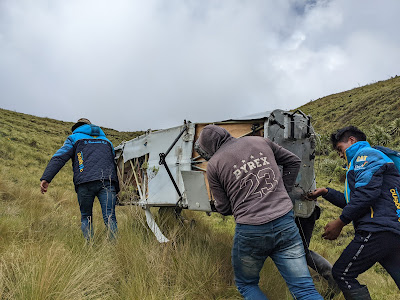 Some of the local men helping to carry out the fuselage. 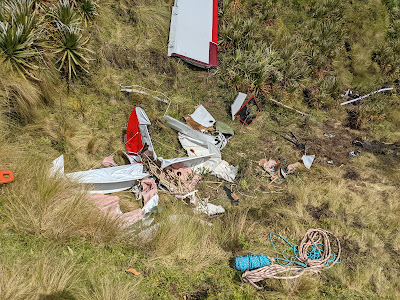 What was left of the airplane after most of the salvageable pieces had been removed.

As the sun began to settle behind the mountains and the fog rolled in, we completed our work and began hiking back to the houses where we would spend the night. The local men would transport the pieces to our vehicles the next morning and afternoon, when we would load the vehicles and be ready to leave the following morning. 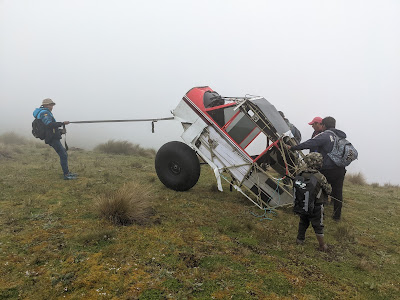 A unique solution for transporting the fuselage. 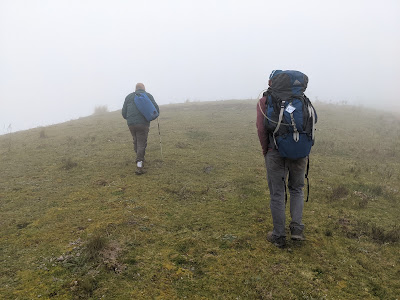 A cool fog settled in as we began the hike back out.

As we traversed the foggy countryside, I was glad that DJ knew the way back to the house! There were several places where the path was not clear, and everything looked different than I had remembered it in the daylight. Finally, we reached the first house, where Tony and Rick would spend the night. We stopped for a short break, but darkness fell just as it started raining. I donned my poncho and headlamp and we started the 20-minute hike down a rocky trail, across a creek, and up a steep grassy hillside. Finally we arrived at the house where the rest of us would spend the night. 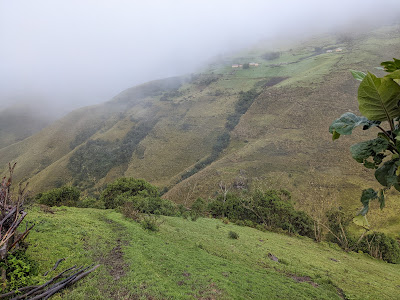 This is the valley we crossed to get from one house to the other. In the top center of the photo, you can just make out the house where Tony and Rick stayed. 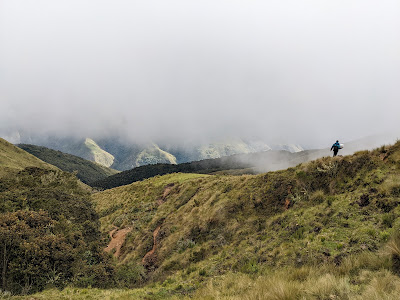 The countryside was beautiful. I just had to remember to stop and take the time to soak it in! 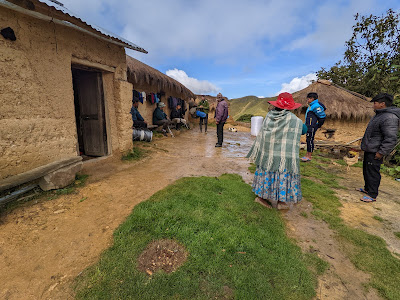 The home where DJ, Josué, and I spent the night (the photo was taken earlier in the day when we passed by).

We were welcomed with a hot cup of tea, warm bread, and a bowl of potato soup. After finishing my dinner and putting on dry clothes, I tossed my sleeping bag on the bed: a wooden platform covered with loose sheep wool and a blanket. Despite the rustic sleeping conditions, I had no problem falling asleep. Whether from comfort or sheer exhaustion, it was the best I’d slept in a long time!

We had reached the halfway-point of our trip, but the next two days would be more exhausting than we imagined. However, that is a story that will be told in my next post!

On February 3, I answered my phone and received the news that no pilot wants to hear. An emergency locator transmitter (ELT) was sending an SOS signal in the area where a friend of mine had been flying. ELTs only begin transmitting under two conditions: when manually activated by the pilot, or when triggered by high g-loads, as in a crash. We began gathering as much information as possible, and preparing for a search and rescue.

Thankfully, within a few hours the pilot was able to find a cellular signal and contact his wife. He had gotten out of the plane before it rolled away and tumbled down a steep hillside, which had activated the ELT. He was unharmed, but the airplane was totaled. Our plans shifted from a rescue operation to an aircraft recovery trip. 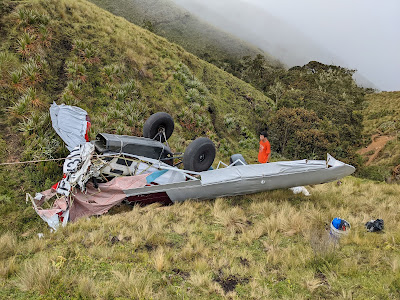 DJ’s plane, as we would later find it awaiting us.

Although the airplane was essentially destroyed, there were still many components that could be salvaged. However, getting those parts out would not be easy. After all, there is a reason why DJ lands his Cub on a hilltop to access this region of Bolivia. Getting to the plane would require driving 14-16 hours on some rough roads, then hiking 3 hours between 11,000 and 13,000 feet above sea level. A team of mechanics and volunteers would hike in to disassemble the airplane, and the locals would help us get the salvageable pieces to a place where they could be loaded onto vehicles—at least that was our hope and prayer.

The day of the trip arrived, and I got up at 2:15 to be on the road by 3:30 am. It was an early start, but necessary if we wanted to avoid driving the worst part of the road at night. As we left Cochabamba, the road turned from pavement, to cobblestone, and finally to dirt. At times the road disappeared briefly into stream crossings, turned to mud, or became littered with loose rocks, ruts, and holes. Even the good sections required constant attention to avoid beating up my vehicle’s suspension with a constant barrage of potholes, rocks, and ruts. 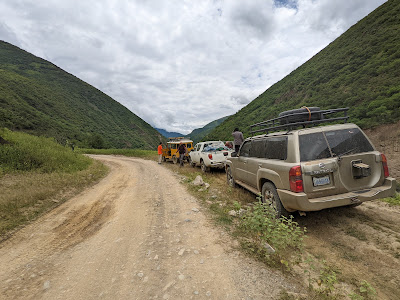 A typical section of road. Not terrible, but requiring constant attention. 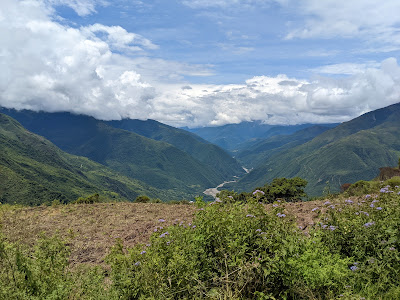 The scenery was amazing! 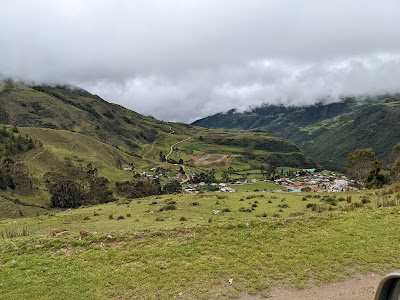 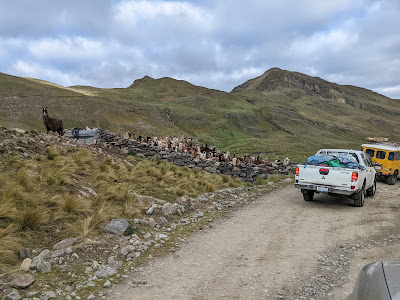 In exchange for this exhausting drive, we were rewarded with the most stunning scenery I’ve seen in Bolivia. We climbed to 15,000 feet, saw herds of llamas, and gazed over beautiful rivers and valleys. We crossed several streams that cascaded down the mountain slopes. We enjoyed good weather and smooth travels, except for the point at which a tour bus was stuck at a hairpin turn in the road. Thankfully, after an hour of maneuvering and moving rocks off of the road, the bus driver was able to continue his ascent, enabling us to continue our journey. 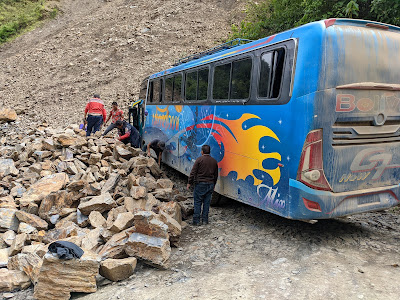 The bus that held us up for an hour or so. 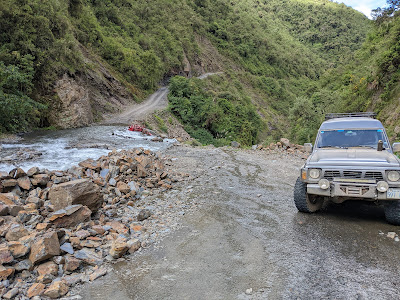 The river crossing that preceded the stuck bus.

As we left the “main” road, it was nearing sunset. That one-hour delay had set us back, meaning that we would face the most dangerous part of the road in the dark. With limited experience in these conditions (and never having driven such roads in our Nissan Patrol), I was a bit on edge, following carefully behind the two vehicles leading the way. Many places were muddy and barely wide enough for my vehicle. Each switchback curved out of reach of my headlights, and I took them very slowly, watching carefully as each new inch of road creeped into my view. Thankfully the car did well, and I didn’t take us over the edge! 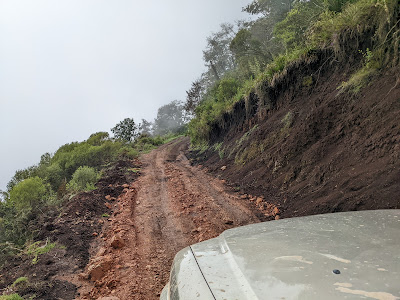 Driving this road in the dark was not my favorite. Thank God for safe travels! 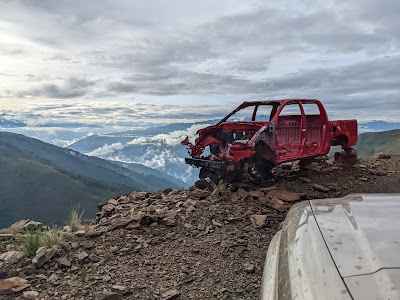 A warning to take this road seriously.

Finally, we arrived safely at our destination: a small school house where we would spend the night. The next morning we would get an early start, hiking to the site where a long, hard day’s work awaited us. But that story will require its own blog post. Stay tuned! 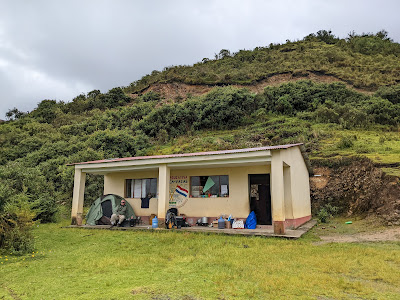 The school house where we slept the first and last nights.