The Value of a Life

For more than a year now, I've been "on loan" to Missionary Air Group in Burlington, North Carolina. My primary focus has been flight training, but MAG also operates three field programs, and part of the goal of being with MAG is to experience what it's like to work in a missionary sending organization. In February, I was excited to have my first opportunity to travel to one of MAG's field programs in Rus Rus, Honduras. My role was to support a team of medical personnel from International Health Services, and to take care of a few maintenance issues around the base.

Two years ago I visited a different village in Honduras, but up to this point the people of Rus Rus have largely been just names and faces in photographs. One of my favorite aspects of the trip was getting to know the Miskito people in person.  After a few days in Rus Rus I finally got over my insecurity about approaching strangers and using my limited Spanish. Interestingly, Spanish is not their first language either, and some of them only speak Miskito (which sometimes made for an awkward moment, when I was not sure if a group was laughing at me, or out of embarrassment, or for some other reason!). I found that most people became very friendly and relaxed when I spoke with them, and were happy to tell me about themselves and to have their pictures taken. It made the visit much more enjoyable when I got in the midst of the people, rather than just hanging around on the fringes!
One day during the trip, I was reading Exodus 30 and verses 11-16 jumped out at me:


Then the Lord said to Moses, “When you take a census of the Israelites to count them, each one must pay the Lord a ransom for his life at the time he is counted. Then no plague will come on them when you number them. Each one who crosses over to those already counted is to give a half shekel, according to the sanctuary shekel, which weighs twenty gerahs. This half shekel is an offering to the Lord. All who cross over, those twenty years old or more, are to give an offering to the Lord. The rich are not to give more than a half shekel and the poor are not to give less when you make the offering to the Lord to atone for your lives. Receive the atonement money from the Israelites and use it for the service of the tent of meeting. It will be a memorial for the Israelites before the Lord, making atonement for your lives.”

As a "ransom for his life" everyone was to give the same amount; the rich were not to give more, and the poor were not to give less. That really stood out to me. During my trek from Burlington to Rus Rus I encountered many people, ranging from the sharply-dressed business man who seemed to think a lot of himself, to the elderly woman from a tiny village across the Nicaragua border. That "important" man might scoff at the idea that he was no more valuable than a widow from an unknown village, but the reality is that apart from Christ, we are equally poor and destitute, in need of a Savior to ransom us from sin and death.
I have to admit that I sometimes fall into the trap of feeling pity toward those we sometimes call "less fortunate" (which tends to mean they have fewer material resources than we do). It is so easy for me to unconsciously set myself up just a bit higher than those I've come to serve. Should I have compassion on those who don't have access to basic medical care, or education, or spiritual nourishment? Yes! But the more I interacted with the people of La Mosquitia, the more I was reminded that they are not so different from me. Each one has a unique story and is deeply loved by the Lord. They have gifts, talents, passions, and desires, and we can learn a lot from them!
Of course, I know all this intellectually, but spending time with the people really helped it to sink in. Being part of an aviation and medical ministry, we have very high standards for operations, maintenance, etc, and we follow protocols to make sure that everything is done with safety and excellence in mind. But in the developing world, they sometimes have to do the best with what they have, and so we have to carefully walk the line between telling them how we think things ought to be done, and coming alongside them, supporting them, loving them, and growing the ministry together. MAG temporarily does not have any expatriates in Rus Rus, and I noticed that the people there are taking increasing ownership of the ministry. That's encouraging!

I thank the Lord for the many blessings and resources that I have been entrusted with. But may I never think that I'm more blessed, or set myself up on a pedestal, simply because of the resources I've been entrusted with. Over the course of nearly three weeks in Honduras I came to appreciate anew the fact that each one of these faces represents a person who is known, loved, and valued by God, just as I am! 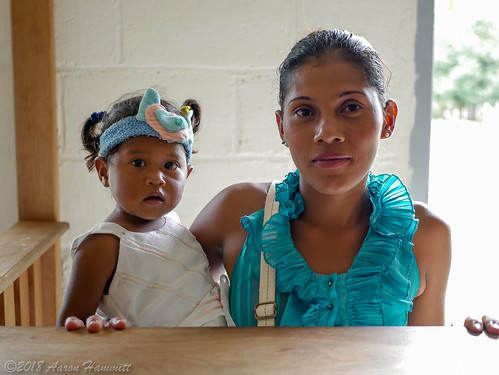 It was three o'clock in the morning when I dragged myself out of bed on a Thursday morning. That was the beginning of a two-day journey (consisting of three flights and two long drives) that would take me to Rus Rus, a remote Honduran village near the Nicaragua border. I came to Honduras to support an annual medical brigade at the Rus Rus hospital. For ten days, medical professionals from the United States, England, and Canada were here to offer their services.

During the medical brigade, people commonly walk two to four hours (or more) to see the doctor or the dentist. That is a long way for a healthy person, but for someone who is sick the walk is even more difficult. The fact that people are willing to travel such distances demonstrates just how much they need the services that are offered here. I've gained a new appreciation for the importance of the hospital to this village and nearby communities.

In addition to medical services, Missionary Air Group would normally provide air support for the medical brigade. The airplane would be used to transfer patients to other hospitals and to bring the medical teams in and out. This year, there was no airplane in Rus Rus, so we relied on ground transportation. However, a trip that would take less than 30 minutes by air takes four hours by car! There were many times during the brigade that I wished I could just get in an airplane and fly someone where they needed to go. I will definitely go home to North Carolina with fresh motivation to work hard at becoming qualified as a field pilot!

I look forward to sharing more about the medical brigade, including photos and videos, when I get back to the States next week. But for now, I'm going to get some rest!