Lessons from the E.R.

Last week started out with a bang...or should I say, "a snap"? Monday after school, Ian was playing with some friends at the playground. While jumping off a platform his foot got caught, causing him to land on his arm, which took the brunt of the fall. As soon as Tara saw his arm from across the playground she knew something wasn't right.

Tara gave me a call while she, Ian, and Ella were on the way to the emergency room. I met them at the hospital. Although he was being very brave, Ian was obviously in a lot of pain, and the doctors gave him morphine as soon as they found a bed for him.  As parents, it was quite shocking to see our son's arm visibly broken and bent out of shape, not knowing whether it was only a broken arm, or whether there was more serious damage. As Ian's father, it's still difficult for me to look at this picture and remember the pain and fear that Ian was enduring.

Soon after giving Ian morphine for the pain, the hospital staff took x-rays, and eventually sedated him to set the bones in place and put his arm in a splint. Fortunately, although he had broken both bones in his forearm, there did not seem to be any further complications. Now, after several days, the worst of the pain is over, and Ian is on his way to recovery.

I am so thankful for the medical facilities that are available here in the United States. In a matter of hours, Ian was attended to by well-trained medical professionals, and the healing process had begun. But what if he had been born in a third-world country? What if he lived in a remote jungle village in South America? Would anyone know how to set the bones to heal properly, or would Ian have lived with a deformed arm for the rest of his life? And how would that affect him? As parents we certainly would have been fearful, not knowing what the outcome would be. 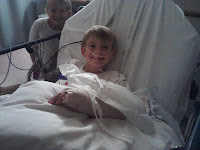 As I ponder these questions, I can't help thinking of the important role that missionary aviation plays in meeting the physical needs of people living in remote areas of the world. While our vision for our ministry in missionary aviation goes beyond physical healing, meeting physical needs is often a first step in demonstrating the love of Christ to people who are in need of Him. What a privilege it is to be able to be involved in this kind of work! I am so excited to have the opportunity to devote my life to taking the love and hope of Christ to the world—hope that lasts not only for this life, but for eternity!
Posted by Aaron at 10:20 PM