A Family Visit to Bolivia

It's hard to believe it's been seven years since we began the journey toward serving in missionary aviation! With much training and preparation behind us, we are now getting close to moving overseas to serve on our first field assignment as a missionary pilot/mechanic family! For the past couple years we have been corresponding with several missionary organizations that we are interested in. There is one ministry in particular that has resonated strongly with us, and that we have been thinking and praying about. Finally, in December, the timing worked out for us to make a visit with our entire family.

We began our trip on a Thursday morning when we started driving toward Miami. After 11 hours we decided to call it a day and stop for the night in Titusville, Florida. Aliza did amazingly well on the drive down, and the big kids helped out a lot, keeping her happy and well-fed. But after all those hours she was glad to be out of her car seat. Her big smiles won her lots of friends at Cracker Barrel! 🙂 We are thankful for everyone who prayed for us during the long car ride.

We started driving again Friday morning with the intention of stopping to see the ocean before continuing to the Miami Airport. But after contending with the crazy traffic coming into Miami we decided to play it safe and head straight to the parking lot where we’d catch an airport shuttle. Interestingly, the shuttle driver was from Peru and made sure to tell us how much we would love Bolivia.

We got to the airport around 4:15 for a 10:30pm flight, which meant lots of waiting at the airport. Unfortunately our flight was delayed twice, but by 1:00am on Saturday we were finally airborne. After a long drive and more than eight hours in the airport we were ready to get some sleep in the dark aircraft cabin. All was well until they decided to turn on the lights and serve us dinner around two o’clock in the morning. Who needs dinner at that hour? Not me, but I suppose someone would have complained about not getting the meatballs they’d paid for. I would have gladly given my meatballs to that guy in exchange for an hour of sleep.

Finally, around 8am on Saturday, we touched down in Bolivia and the kids set foot on foreign soil for the first time! Fortunately our connecting flight was waiting for us (and more importantly for some crew members), so we made it to Cochabamba late morning. Immigration and customs went quickly, and Tony was there to meet us and drive us back to the mission house. It’s a really nice place, and we get a floor to ourselves. It was only the fourth floor, but at 8500’ elevation we noticed those flights of stairs!

Saturday was a rest day, and Sunday we visited the “International Church”. I put that in quotes because the church has evolved from a mostly English-speaking church to a church comprised mostly of Bolivians and other Spanish speakers. A few songs were done in English, but the rest of the service was in Spanish. I was pleasantly surprised that I could understand a majority of what was said, so that was encouraging. After church we had lunch, rested for a while, and went for a walk around the neighborhood.

After a couple days of settling in and learning about ITM's ministry, I had the opportunity to fly out to one of the villages where we would pick up a team that had been serving there for a couple weeks. The morning started early, when I rolled out of bed at 3:30. Cristian, one of the ITM staff, arrived to pick me up at 4:15. That was the first of three stops he was making around the city, and by 5:00 the truck was pulling into the airport, crammed full of adults, children, and cargo.

Before the sun had risen, we were taxiing to the other side of the field where we would file our flight plan and completely unload the airplane to be inspected by the anti-narcotic branch of the police. After the inspection we re-packed the airplane and waited to get a report that the weather was clear at our destination. By 7:15 our flight plan had expired and the weather had not cleared, meaning it was time to go through the whole process again. Apparently nothing is easy in Bolivia when it comes to paperwork and bureaucracy!

To make a long story short, the weather didn’t clear and we cancelled the flight. That’s just part of flying in Bolivia during the rainy season. It seems that the old saying is true: “Time to spare? Go by air!” That being said, the airplane is still—without a doubt—the best way to get out to the tribes.

Later in the day, our family had lunch with several families and individuals that serve with ITM in Cochabamba. It was encouraging to hear about the church planting and discipleship that is happening in many small villages in the highlands near Cochabamba. There is also a great need for more laborers to disciple believers in these young churches. We had an opportunity to share about our journey, and our time together concluded by praying for one another. It was a very encouraging afternoon!

Finally, we drove out to see Cristo de la Concordia—the giant statue of Jesus that overlooks the city. By the time we got there it was pouring rain, so we didn’t spend much time there. At the base of the statue is a sculpture of an open Bible with the text of John 14:6; yet there are so many people in this region who haven’t heard about Jesus—the Way, the Truth, and the Life.


Thursday morning, the weather was looking good, so we tried again for the flight out to the village of Oromomo. This time we were able to make it out of Cochabamba on top of a sea of clouds. As we approached the village the clouds were breaking up, but there was still a low cloud layer that Tony was able to duck under and make a landing in Oromomo. While Tony shuttled the team to a nearby village I stayed in Oromomo where I got a tour from Tito, the pastor of the church in the village. He also explained to me the need for more laborers to reach the many unreached settlements around Oromomo. After seeing the village, I enjoyed a cup of coffee (and a taste of mate) and conversation with Tito and Ramon, one of the team members who had been serving in Oromomo.

One of the things we love about the ministry of ITM is that the staff is multicultural, and most of the church planting and discipleship is being done by Bolivian nationals. There are even short-term teams that come to serve from other parts of the country. As expats, we would be supporting and working alongside Bolivians that are reaching people within their own borders with the Gospel.


Since we had come all the way to Bolivia, I felt that it would be very helpful for our whole family (not just me) to fly out to one of the remote "front-line" ministry locations. On Friday we flew to the village of San Lorenzo to meet some of the Bolivian ITM missionaries, and to see the radio station and Bible school that is being constructed to train tribal church leaders. On of my goals for that visit was for Ian and Ella to get a glimpse of the work that we would be supporting, and simply to see what life is like in the more remote parts of Bolivia. While walking around San Lorenzo and talking with Tony, they also got an idea of how they could participate in the work that God is doing here, especially helping to support teams that come to serve in the tribal areas.

During our visit to the radio station, we had a few moments to sit and talk with Ivan and Cendy, the staff members who run the station in addition to other responsibilities. They were so encouraging to us, and especially to the kids. After we talked for a while they shared some Scripture and prayed for our family. We felt very blessed by them, and would be excited to help support these Bolivian missionaries who have made significant sacrifices to serve in remote parts of their own country.


We came back very excited about the possibility of serving in Bolivia with ITM. It's not the easiest place to serve, and there would be some challenges. But we know that the Lord will be with us wherever He calls us. We're not making any big announcements quite yet, but we are excited about what lies ahead for our family.

From the window of the mission house in Cochabamba we could see the outstretched arms of a giant Jesus statue. That was pretty neat, but we are thankful that there is a real Jesus who actually holds and sustains all things, and we continue to trust Him to direct our steps, desiring His will to be done in us! Thanks again for walking alongside us on this journey! 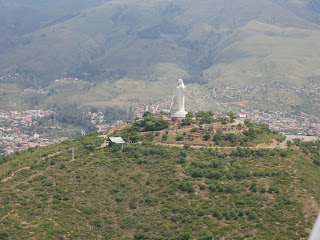