Last week, Ian and I had the opportunity to travel to Clendenin, West Virginia with a work team from Burt Avenue Wesleyan Church in Coshocton. Although the timing of the trip was not convenient (we are preparing to move to North Carolina), Ian expressed interest in participating and I wanted to be supportive of his desire to serve. I'm glad we decided to go! 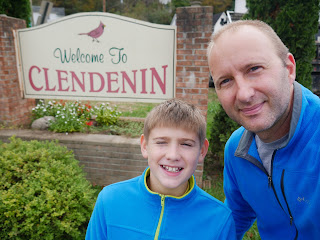 We spent four days installing new drywall for a woman named Barbara, whose mobile home was destroyed by the recent flooding in Clendenin. She came into possession of another home, but that house had been damaged by the flood as well. Previous volunteers had cleaned up debris from the flood and cut off about four feet of drywall that had been damaged. Our job was to splice in new drywall, and to tape, mud and sand as much as possible.

It was almost unbelievable that the relatively mild river flowing through Clendenin could rise to high enough levels to cause such damage. The normal level of the river is more than twenty feet below street level, but during the flood the water level rose about seven feet above the street, as shown in the photo below.


It was a privilege to spend a few days serving Barb, helping her establish her new home in Clendenin. I also enjoyed working alongside Ian, serving together. I was extremely proud of Ian: how hard he worked, how much he learned (by the second or third day he could measure, cut and hang sections of drywall on his own), and how he stepped outside his comfort zone to connect with the rest of the team.


We enjoyed spending time together, as well as working with the Burt Avenue team, some of whom are pictured below. Even though our family is in "full-time" mission service, it was nice to do something different, meeting a tangible need for someone who desperately needed our help.